If you do your own worm egg counts, you will come across things that appear to be parasites but aren’t.  These are called pseudoparasites.

Pictures and descriptions can be found in standard parasitology texts.

Here are some links that may be of use:

Some parasitology texts with pictures of pseudoparasites:

The cost of drench resistance

Among other things, Dr Brown Besier discusses the cost of drench resistance in this article he produced for ParaBoss News:

‘Australian researchers have discovered how to kill a common parasite that can survive for decades undetected in humans and possibly change the brain’s behaviour and personality.’

‘The finding could lead to a vaccine that would prevent pregnant women being infected by the Toxoplasma gondii parasite, which can increase the risk of miscarriage or severe birth defects.’

‘Lead author Dr Chris Tonkin, from the Walter and Eliza Hall Institute of Medical Research, said Toxoplasma was a common parasite that was transmitted by cats and also found in raw or undercooked meat.Once in humans, the parasite hijacks cells in the brain, heart, lungs and muscles.’

‘ … the study also revealed Toxoplasma “modified” the host cell by sending in proteins to manipulate the host cell’s function so the parasite could reproduce and grow.’

‘Dr Tonkin said it was estimated about 35 per cent of the Australian population carried the parasite, which could remain dormant for a person’s lifetime without their knowledge.’ 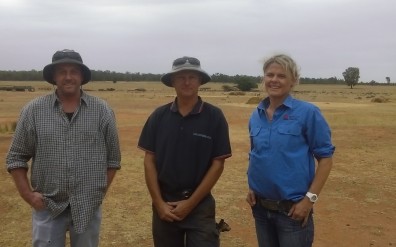 ‘The widespread dissemination of superior genetics throughout livestock populations has seen the frequent emergence of inherited diseases, which cause significant economic and animal welfare concerns. Inherited disease refers to disorders that are passed down from parents due to abnormalities in the DNA.

CVS, also known as wobbler syndrome, is a neurological disease with progressive ataxia, caused by compression (or stretching) of the spinal cord due to an abnormality in the spinal column. Affected animals can be recognised by a particular stance where the neck is shortened and head held low, and an ataxic, or ‘wobbly’ gait.   It’s occurrence on two separate properties suggests that the prevalence of this disease may be moderate to high.

Both cases were referred to the Genetics Laboratory at the SVDL who have arranged the collection of additional samples and pedigree information to facilitate a molecular investigation into the genetic basis for this disease. A funding application in collaboration with the University of Sydney has been submitted with the aim to commence investigations early in 2016. The primary objectives of the project are to discover the mutation responsible and develop a DNA based test to provide an effective management solution for effected producers and the sheep industry.

Brucellosis in animals and humans

https://aib.sd.gov/Pamphlets/Brucella%20ovis%202013.07.pdf
“Unlike most species of Brucella, B. ovis is not known to infect humans”

http://www.cdc.gov/brucellosis/clinicians/brucella-species.html – ​​‘Brucella ovis and neotomae Not known to be pathogenic for humans”

From my alma mater:

Source: Malwarebytes – how does anti-malware work?

(What’s so bad about being a worm man?)

Saint Nicholas of Myra – the real man behind Santa

‘Specialist: someone who knows more and more about less and less ’till they know everything about nothing’ (S.L, pers comm (i.e. I am not aware of reading this elsewhere)).

In this issue of WormMail:

The following was presented at the 2015 meeting of the World Association for the Advancement of Veterinary Parasitology (WAAVP), by Dr Dave Leathwick of Agresearch Grasslands, Palmerston North, New Zealand.

“Anthelmintic resistance in gastrointestinal nematodes is now a global phenomenon affecting most species of grazing animals (e.g. goats, sheep, cattle, deer and horses). Considerable scientific effort has been put into understanding how resistance develops and how it can be delayed or managed. However, the development and marketing of anthelmintic products has evolved more or less independently of any considerations for the development of resistance. This presentation will consider the hypothesis that the way in which anthelmintic products are formulated and delivered plays an important role in the rate at which resistance develops to the constituent actives. All anthelmintic products are registered as effective against a range of parasite species based on measured efficacy against populations which are susceptible to the active ingredient at the administered dose rate. However, the rate at which resistance develops is strongly influenced by efficacy against resistant genotypes, in particular the heterozygotes during the early phase of selection when resistance genes are still rare.

The way in which drugs are formulated and delivered can affect the dose, variability in dose and duration of exposure of the target worms to the drug, and all these factors can potentially influence the rate at which resistance develops in the treated population. Different routes of administration (e.g. pour-on, injection, oral) result in very large differences in plasma profiles, but, in fact these may be largely irrelevant as plasma levels may be a poor indicator of the concentration of drug reaching the target worms. Formulations and routes of administration which result in persistent activity influence the reproductive advantage afforded to resistant genotypes, especially when drug concentrations decline to suboptimal levels over time. Combining different actives with similar spectra of activity into a single product has been shown to have benefits in reducing the survival of resistant genotypes. However, use of combinations raises the potential of drug-drug interactions and formulation effects which may also be important”.

That, at least, is the aim of research in NZ by Leathwick and others:

We await the outcome with interest. In the lab, sodium hypochlorite (household bleach) is commonly used to exsheath larvae (See Hutchinson GW-ANZSDP-ruminant_nematodes-SCAHLS-issued May 2009 ). (Correct: spraying bleach all over your farm is not recommend).

And various have researched exsheatment of larvae, at least in vitro, eg. Silverman and Podger, Experimental Parasitology, 1964.

Resist measuring resilience: Recording high performers in their parasitised environment is simpler and as good (WAAVP 2015)

“Although discussed for at least 25 years, there appears to be renewed interest in measuring resilience of sheep to gastrointestinal nematodes. While not novel, increasing resilience to the effects of infection remains an appealing approach to parasite management in the face of multi-drug resistance.

We highlight that the complications associated with measuring resilience can be avoided by using simpler measures of productivity, thus highlighting that resilience is indeed an artless measure of an animal’s ability to perform when challenged by infection. To measure resilience, a cross-over experiment was conducted to compare phenotypic measures of resilience to gastro-intestinal nematodes (predominantly Haemonchus contortus) in Merino sheep and their association with resistance and production. Ewes were serially treated with long-acting anthelmintics (suppressed; n=360) to suppress infection, or periodically treated according to management practices of the farm (infected; n=360). After one year, sheep had their anthelmintic treatments switched for a further year. Measures of apparent resilience were greasy fleece weight (GFW), live weight gain (LWG) and haematocrit (HCT) when infected and measures of true resilience were the difference in these variables within an animal when infected and suppressed. Measures of resilience based on GFW, LWG and HCT were only moderately correlated suggesting they represent different traits.

Correlations between apparent and true resilience were higher indicating that measurement during infection is an adequate measure of resilience. These results demonstrate that simple measurement of performance traits while infected (i.e. receiving periodic treatments associated with typical farm management) is a reasonable approximation of true resilience. They also highlight that resilience to gastrointestinal nematode infection is not a single trait, but rather a suite of moderately correlated traits. Given that genetic selection of production traits occurs in a parasitised environment, the marginal benefit to be gained from additional genetic indicators of resilience remains of questionable value”.

The latest issue, along with explanatory notes, is up on the NSW DPI website.

“Insanity: doing the same thing over and over again and expecting different results.”  Albert Einstein

However, it has been suggested Einstein did not say that. ‘Still sounds good to me though, even if penned by that most prolific writer, Anon.