A new edition of this Primefact has been published on the NSW DPI website:

http://www.dpi.nsw.gov.au/animals-and-livestock/sheep/health/internal-parasites/liver-fluke-review
This Primefact is a companion to Dr Boray’s liver fluke Primefact (446; 4th ed, March 2017), which was also revised/updated recently (but still mostly ‘pure Boray’). http://www.dpi.nsw.gov.au/animals-and-livestock/sheep/health/internal-parasites/liverfluke-disease-sheep-cattle
Primefact 813 is ~ 19 (!) pages long (including some nice pics, tables, and a very long reference list), and has been written at 3 levels:
1. Summary at the front. About half a page; bare-bones summary.
It also contains a link/reference to Dr Boray’s Primefact which really targets the broad, middle ground. (A giant in the world of parasitology, Joe could also write appropriately for different ‘audiences’).
2. The guts of the Primefact. Target: producers, advisers and others who are somewhat to very interested and motivated with respect to liver fluke.  A range of fluke-related topics are covered, and in some detail. Many salient facts from recent literature (mostly the last decade; Australia and Europe etc)) are included. (Can liver fluke cross- and self-fertilize?  Did you know about its cuticular spines? How long do metacercariae live? Vaccines? When do the antibody and coproantigen ELISAs detect fluke infections?)  References are cited.
3. The appendix.  This is for the serious reader. A bit more hard core.   Tabulated summaries of information on flukicide synergism, characteristics of various flukicides, flukicide resistance, and features of the various diagnostic tests. (Does one cross-react with stomach fluke?).
It also contains a link to two tabulated summaries (available as PDFs) in WormMail on flukicide efficacy, and more on synergism, etc.
In addition there are notes on sundry and various, including human infections, prenatal infection, why nitroxynil is not given orally, why salicylanilides are not so effective against immature fluke, the only flukicide for which resistance is not yet recorded? etc etc   But, there are no steak knives.  In short, it contains answers to some of my own questions which I could never find in one place, or in several places.
~~~~~~~~~~
An enormous debt of gratitude is owed to Dr Joe Boray. And, several years ago, he also wrote some essays on fluke for the WormMail newsletter. These are referenced in PrimeFact 813 as well.
See also the great article on Joe written by Dr Bruce Watt (at the end of the revised version of Joe Boray’s Primefact (446)).

(Another reason ‘real’ men don’t eat vegetables? (joking!)…but then there is the pork tapeworm..T solium…so real men don’t eat bacon either?   (but does T solium survive in bacon/the curing process??  I see a research project happening…)

Dr Dave Spratt (CSIRO), guru on worms of Australian native fauna (along with Ian Beveridge and others), advised as follows:

“Depending on what species the “roo” (or wallaby) was, those large nematodes are species of either Labiostrongylus, Labiosimplex or Labiomultiplex, very common in the stomachs of macropodids.’

“(Being a) “a red ‘roo’, then those nematodes are Labiosimplex of which three species occur in reds”.

I don’t know what species these worms are, but there is some information on Labiosimplex in a paper by Smales, 2011:

BUT… I did find this:

“4.11. 1. Macropods (kangaroos and wallabies)
The kangaroos and wallabies harbour the most diverse parasite faunas
of all of the marsupials. By far the most numerous are the strongyloid
nematodes found in the sacculated forestomachs (Fig. 4.11.1), with 250
species described so far but with many more yet to describe. Nematodes
also occur in very large numbers (up to 500, 000) in the forestomach
and are frequently encountered at autopsy. The species described here
have been selected because they are the most frequently encountered
or because they are pathogenic. For simplicity, the term “kangaroo” has
been used to include all kangaroos and wallabies.
Fig. 4.11.1. Stomach of an agile wallaby, Macropus agilis, with
strongyloid nematatodes. (Image courtesy of I. Beveridge).
4.11.1.1 Gastrointestinal tract
Stomach
Labiostrongylus spp.
Species of Labiostrongylus are large (to 10 cm) nematodes found
in the lumen of the sacculate forestomachs; for simplicity, the
numerous species as well as those of the related genera Labiosimplex,
Labiomultiplex, Parazoniolaimus and Potorostrongylus are dealt with
together.”   “Eggs are passed in faeces and a doubly ensheathed L3 emerges from
the egg; the L3 is ingested and migrates into the gastric mucosa; the L4
and adult are found in the stomach lumen. The life cycle may be highly
seasonal with one generation per year and with the development of
adults and the onset of egg laying coinciding with the most favourable
climatic conditions (low temperatures, high rainfall)”. (Emphases (bolding) is mine-SL) 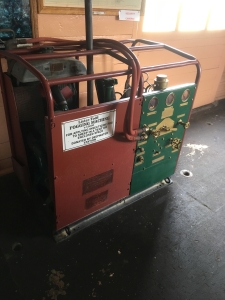 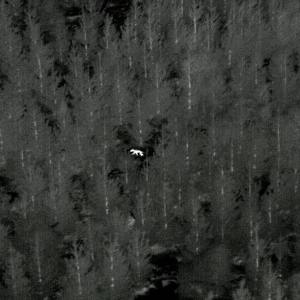 This infrared image shows a wild dog walking through pine forest in southern NSW. It is an important proof-of-concept for pursuing improved monitoring of invasive species via aerial platforms in heavily vegetated environments. It is yet another product of a valuable collaboration between NSW DPI and Riverina LLS, working alongside private contractors, National Parks and Forestry Corp.

wormmail in the cloud
Blog at WordPress.com.